After graduating from UT Law School, Bobby Taylor staffed and directed a legal aid group in Austin.  His belief that everyone had a right to legal representation is a belief that has led him to take cases and clients with extraordinary challenges.

Since starting his own practice, he has focused on providing his clients with great legal representation and obtaining the most positive outcome. During his extensive career the has already advised and represented clients in in almost every situation.

He has won cases in Local, State and Federal jurisdictions and even received license to appear before the U.S. Supreme Court.  He has taken on powerful individuals, corporations, organizations and governments to represent his clients. 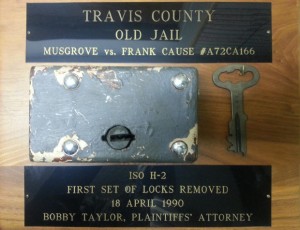 In addition to the many successful civil rights cases that have brought meaningful change and financial justice to his clients, he spent two decades getting the inmates in Travis County safe and humane living conditions by forcing the county to build a new jail.

The jail, in service since 1932 was declared unconstitutional in 1974 with Bobby Taylor’s representation. The appeals process and the magnitude to the costs and time required to build the new jail required decades of perseverance. This lock and key set was taken form one of the old jail cell doors and presented to Bobby as an recognition of his efforts on behalf of those prisoners.

When representing the Rocha family, Bobby challenged the status quo of Austin’s powerless citizen review board and called for a federal investigation of the city’s failure to take action against police even when their actions are criminal.

.
Whether you or your family has been persecuted by a Civil Rights violation or are being prosecuted for an alleged Criminal offence, we will aggressively represent you.How counterfeit medicaments end up in our public health system